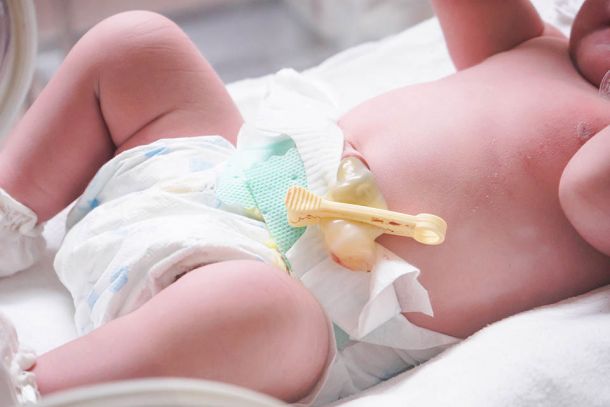 There has been much discussion in the media recently about delayed clamping of the umbilical cord. Also known as DCC, Delayed Cord Clamping is a process in which the umbilical cord of the newborn is left intact for an extended period of time during the third stage of labour.

DCC is not a new procedure. Active management of the third stage of labour (a combination of: administering oxytocin with the delivery of the anterior shoulder, early umbilical cord clamping, umbilical cord traction and uterine massage) was shown to decrease the risk of maternal postpartum bleeding and was thus adopted as the standard of obstetrical practice. However, we now know that DCC independently has been demonstrated to be safe in relation to the risk for postpartum bleeding for the mother.

A recent large clinical trial in Sweden demonstrated that DCC increased the baby's iron levels at four months of age, as well as decreased the rate of anemia (low blood cell numbers) at two days of age. Previously, it was believed that the placenta to baby blood transfusion that occurs with DCC would increase the rate of jaundice resulting in higher numbers of infants needing phototherapy; however recent large clinical trials have not demonstrated a clinically significant relationship.

Medicine and medical practices are constantly evolving. Because DCC is a non-intervention, which may provide benefit to the newborn without increasing risk to the mother, it is reasonable to consider DCC in all deliveries. However, it is important to remember that every delivery is different and care and attention to gestational age and neonatal resuscitation must be taken into consideration.

In our own hospital, we have a policy in place to promote DCC with all deliveries including those baby's born by caesarean section or prematurely. The recommendation is to delay the clamping of the umbilical cord by at least a minute beyond which there is no real evidence of further benefit.